Some time ago, Granville Barnett (see his homepage and old blog [^] or a new blog [^]) had a great idea and started a CodePlex project called F# Samples [^] to host various samples written in F# to demonstrate the most important concepts of both functional programming and F#. I quite like this idea, so I asked Granville if I could join and add some samples that I wrote and today I finally found a time to update what I wanted to upload to the latest version of F# and put it online.

What are F# Quotations?

For those who are new to F# and its meta-programming support I will quickly describe what are quotations good for. Basically, the feature that I refer to as quotations allows heterogeneous execution of F# programs - this means that single program written entirely in F# can run not only as a .NET code, but can also run in various other environments and quotations make it possible to "take" part of the program, process it and execute it somewhere else. Of course, you don't have to execute the code - you can perform some analysis of the code, transform it to whatever you like and so on. By the way, if you know C# 3.0 and LINQ than quotations serve for the same purpose as lambda expressions in C#. In C#, the lambda expression can be compiled to an expression tree that can be analyzed and (for example) translated to SQL. The F# quotations are similar - you can access the quoted F# code as a representation similar to C# expression trees and process it in any way you want.

It may still sound a bit abstract to you, so let me give some examples where this can be useful! First of all, in C# 3.0 similar technique is used for writing database queries in C# and translating them to SQL (so they can be executed efficiently) and indeed, one of the F# goals was to enable this as well. I already wrote about this topic on my blog [2], but here is a quick example how the code looks (note that the Unicode quotation symbols used in the sample can be also written as <@@ .. @@>):

In this example, a query comprehension (in the curly braces) is wrapped in quotation marks, which allows the SQL function to analyze the F# code and translate it to the appropriate SQL code. Another interesting use is that a code that performs some matrix operations can be executed on GPU (using pixel and vertex shaders). You can imagine writing something like the following:

It would be then possible to translate this code to GPU code and process matrices on the graphics card (BTW: I'd like to write about this in more details soon, because this is quite interesting topic and I looked at it briefly during my MSR visit). Finally, one more use can be found in the F# Web Toolkit project [3] that I worked on recently - it uses quotations to allow writing client-side code running in web browser (the code is then translated to JavaScript). An example might look like the following:

You might be wondering where the quotation symbols are hiding in this example! Actually, this is using one more quotations feature (which I personally find very interesting) and that is the ReflectedDefinition attribute. If you mark any code with it, it will be later possible to access the quotation (AST representation of the code) at runtime. This means that in the F# Web Toolkit the runtime analyses the entire web application and finds all the client-side methods dynamically and translates them to JavaScript.

If you're looking for more information about quotations, you can read the paper about this F# feature written by Don Syme [1] - the implementation has now changed a bit, but the paper is still worth reading, because it describes the approach and gives some more interesting examples.

The first things that I added to the CodePlex project are two basic samples that demonstrate how to use F# quotations - you can find them in the Basics/Quotations directory. The first example (the calculator.fs source) demonstrates how to analyze F# quotation and translate it to another representation of the code. It takes a simple numerical expression (something like: « (2*3 + 10/5)/2 - 2 ») and translates it to the following representation:

This sample first uses Int32 active pattern (which is simply a guard that can be used in the match expression) to test if the value x contains a quoted integer. The second active pattern (TopDefnApp) matches the value with the use of a specific top-level value - in this case a plus operator (as you can see the plus operator is given as an argument to the active pattern - it is quoted using <@@@@ .. @@@@> symbols that return a raw representation of the quotation, which is used when processing quotations programatically). If the value matches the operator, the two arguments are processed recursively and a value representing addition is created. Finally, the sample uses augmentations to add these basic functions to the SimpleExpr type, which means that having a value of SimpleExpr you can for example write se.Eval() to evaluate the value or you can uses static method to create it from an F# quotation: SimpleExpr.Parse(quot):

The second sample is based on forum posts at the F# community site [^] by me and Robert Pickering [^] in which we demonstrated how to write a simple printer for the F# quotations. It demonstrates most of the common active patterns used for processing quotations and it also demonstrates how to work with the ReflectedDefinition attribute. The following sample shows a simplified part of the recursive print function:

The more interesting part of this example is a code that extracts quotation from a top-level value marked with the ReflectedDefinition attribute. To do this, we first need to get a quotation that represents a reference to the value - this can be easily done by marking the value using quotation symbols:

Once we have the quoted value, we can match it with a AnyTopDefnUse active pattern, which succeeds when a quotation represents a reference to a global value. This active patterns returns an tuple that represents a 'path' to a value - this is an internal F# representation that can be used as an argument to the ResolveTopDefinition function. And finally, if the function succeeds, then it gives us a quotation of the value!

The second sample that I added to the F# Samples project is located in the Samples/QuotationVisualizer directory. It is a new version of a tool that I wrote earlier (and also blogged about it several times on this blog - for example [4]). The tool is quite similar to the version I wrote about last time, but it is updated to work with the latest F# version, and having worked on a few projects that use F# quotations I can say that it is very useful :-)! It visualizes any given quotation as a tree in a Windows GUI, so you can see how the F# expression is represented: 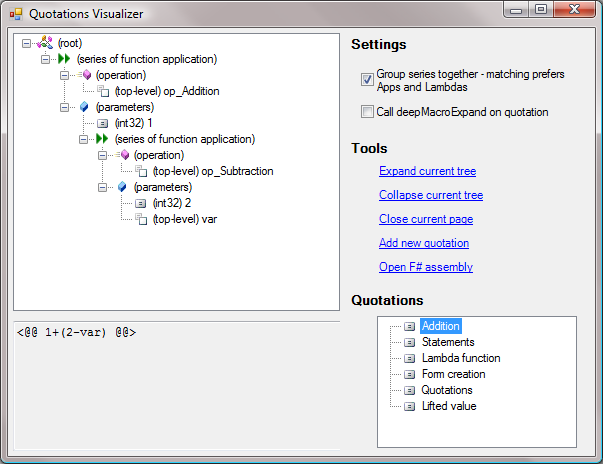 In this screenshot, you can see how is the F# expression 1+(2-var) represented. There are two function applications that apply numeric operators to a two arguments. To view an expression with this tool you can either enter it in the main.fs file and recompile the tool or you can use the Add new quotation link, which opens a window where you can enter an F# code to be visualized (note that you may need to modify the fsc.exe path in the quotvis.exe.config file to use this feature). If you have an assembly produced using the F# compiler that contains some values marked using the ReflectedDefinition attribute, you can use the Open F# assembly to load all quotations from the assembly.