Here is a couple of links that you may found interesting if you want to look inside the book, download some free content and source code or if you're considering buying a copy. 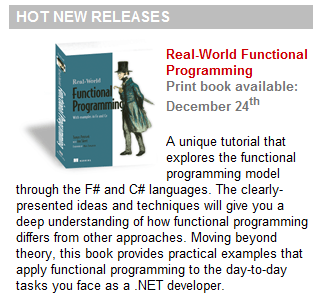 The screenshot on the right shows Real-World Functional Programming listed on the Manning homepage as a hot new release - if you go to their web site, you can no longer find my book in the right column (Manning Early Access), but it has moved to the left column (New and Recent Releases)!

Anyway, I also wanted to draw your attention to a special action that Manning is organizing this month. You have a chance to win an ebook every day and there are also special actions each day (also, there were some MEGADEALS on Mondays, so it may be a good idea to check the web site next Monday :-). I don't have any insider information, but if you want to buy my book with discount, you may want to check it out!

That's all about the book for today! I hope I'll have more time for blogging now that the book is finally done. I'm planning to write about a few topics that I briefly touched in the book, but didn't have the space to fully explain them. I'm also working on a series about using the Accelerator project that allows you to program GPUs in any managed language... The first article from the series will be available in a few days.