I believe that the LINQ project and changes in C# 3.0 and VB 9 are interesting because they allow rewriting of many ideas from functional programming. An ability to express queries easily is one of these ideas, but it is definitely not the only one. There are many other interesting ideas. The C# 3.0 language isn't primary a functional language, so it isn't easy to discover the idea if you use only C#, but it is possible to implement it if you know the idea already.

I already wrote a few interesting C# examples that were inspired by some functional idea. I'm a big fan of the F# language, so it is not a surprise that I started with an F# version of the problem and then looked at the way to do the same thing in C#. In particular, this is how my article about building dynamic queries in C# came to the existence - the F# version used FLINQ and Quotations [2] and then I demonstrated how to do the same in C# using expression trees [3]. Another example is my article about asynchronous programming in C# using iterators [4], which shows how to implement something like F# asynchronous workflows [5] using iterators in C# 2.0.

Today, I'm going to look at another very interesting idea from functional programming. It is called Functional Reactive Programming and it comes from the Haskell community. You can find a list of related Haskell projects here. However, similar things (though they are not purely functional and somewhat simplified) are available in the F# language as well. Don Syme introduced them in his blog post called "F# First Class Events: Simplicity and Compositionality in Imperative Reactive Programming" [1]. In this article, I'm going to briefly introduce the implementation available in F# and I'll extend it a little bit to allow some more interesting things. In the second article from this series, I'll show how to implement the same thing in C# 3.0 (and in VB 9 too!)

Actually this relation between functional programming in F# and C# is the key topic for my book Real-world Functional Programming in .NET. The book will discuss some of the topics that I'll introduce in this article in a larger detail. In this article I'll talk about events only, but the second important part of functional reactive programming is the use of continuous, time-varying values (such as the position of mouse or the time). In the book, this will be discussed as part of the Chapter 15 and events are the key topic for Chapter 16.

Working with events in F# 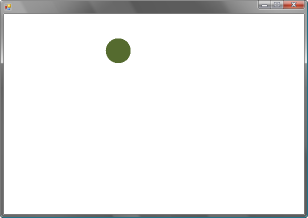 Let's briefly look at the features that are already available in the F# language and libraries. In F#, you can work with events as if they were ordinary objects (in functional terminology, we'd say values). This means that you can write a function that takes an event as an argument and returns an event. This allows us to write various functions for processing events. We'll demonstrate this soon, but first let's create some form that we can use for testing. The following example shows how to create a Windows Form with a small green ellipse somewhere on the form. You can see the expected result in the attached screenshot. If you paste the source code to the F# interactive, a form should appear (Note, you can open the code in Visual Studio, select it and hit Alt + Enter to run it in the F# interactive):

Nothing very exciting so far; n this example we used events in the traditional way. This means that we used the Add method to attach a handler to the event and we specified the event handler in a lambda function (which is just like anonymous delegate in C# 2.0 or function in C# 3.0). This is the usual way for attaching handlers to events in C# too, with the difference that you use built-in += operator.

Now, let's finally take a look at the F# way of processing events. We'll extend the example to display some message when a user clicks on the ellipse. Traditionally, you'd write an event handler that would get MouseEventArgs as an argument. It would test whether the position of the cursor is inside the ellipse and then show the message. However, there is another way we can think about events. You can imagine that event such as MouseDown is a stream of information about the clicks. Once you click on the form, new information appears in the stream and we can process it. When we think of events in this way, we can see that events (or event streams) are very similar to lists or other collections. This means that we can use techniques for working with collections for processing events.

I already wrote about functions for working with lists in F# in my F# overview [6], but very briefly - you can use functions like filter and map for working with lists. The first one returns a list with elements for which a given predicate is true. The second one uses the given function to transform an element (for example a number n) into something else (for example a type that contains the original number and its square). Let's take a look at an example that demonstrates this:

In this example, we took a list of numbers from 1 to 10. Then we filtered it using List.filter, so the result contained only odd numbers. Finally, we used the List.map function to transform the list into a list that contains a number and its square. We're using the pipeline operator (written as |>) to sequence the operations. This simply means that the result of the operation on the left side will be used as an argument for the next operation in the pipeline. You can see that the result printed by the F# interactive contains squares of all odd numbers in that range.

You may be wondering why I am talking about lists here, when I promised an article about events. The answer is that functions like this make perfect sense for working with events as well. We can use filter to ignore events that are not interesting for us (such as when the user clicks outside of the ellipse) and we can use map to turn information about the click into something more interesting, such as a message that we'll show to the user. Let's finally implement the code that handles clicks on the ellipse using these event processing functions:

We aren't yet done with the application, but we did two important steps. Let's take a look at them in detail. We first used the Event.filter processing function. The predicate that we gave it tests whether the center of the ellipse (x + 25, y + 25) is close enough to the location of the mouse click. The mi value represents MouseEventArgs, so the location of the click is stored in (mi.X, mi.Y). The next processing function we're using is Event.map. This takes the information about the click and returns some string depending on the button that was used.

I entered the code to the F# interactive, so that we can see what the result is. As you can see, this creates a value called evtMessages that has a type IEvent<string>. This is the F# representation of events. This means that the result is an event that will be raised when the user clicks on the ellipse. The values carried by the event will be of type string. The only thing that we need to do now is to add handler for the event and display the message in the message box. Our goal is to get something like the message in the screenshot on the right side.

The evtMessages value is an ordinary event, so we could use its Add method just like we used Add method of the frm.Paint event earlier. However, F# gives us more ways to do this and it's a good idea to use the same approach that we used in the previous listing to filter the event stream.

We need to do two things - first, we'll need to add some additional text to the message and second, we want to display the message box. This can be written using two primitives. You know the first one already - we'll use Event.map to turn the event stream with simple messages into a stream that contains messages that we actually want to show to the user. In the next step, we'll use Event.listen. This is a processing function that simply calls a function we give it when the event is raised and doesn't do anything else. This means that it ends our event processing code and returns unit, which is just like void in C#. We'll use two more functional tricks - partial function application and function composition. These are in detail explained in my F# book, but you can get some idea from the F# overview [5] that I wrote some time ago.

This time we'll writing processing code for the evtMessages value, which is an event that we constructed in the previous example. In the first line, we use the Event.map function to format the message. We use the sprintf function and give it a format string that specifies that the function should expect a string as an argument. This means that the type of the expression in parentheses will be a function that takes a string and returns a string. This is compatible with what Event.map expects - it is a function. We used partial application, which means that we omitted the last argument and used the expression as a function value.

In this article, we've looked at an example that demonstrates the idea behind reactive programming and working with events as values in F#. I haven't discussed all the details - there are many other operations such as Event.map and Event.filter that you can use to combine event processing code in different ways (and these are indeed discussed in my book). In the next part of this mini-series, we're going to look how to implement the same ideas in C#. I'll also introduce my project, which is an implementation of LINQ query operators for events that I call Reactive LINQ.